Audrey Hepburn was an astonishingly beautiful woman. Yes, she had stunning features, a great figure and a dazzling sense of style, but that was not really what set her apart. Even on film, she radiated a joie de vivre. When you look at a photo of Hepburn, what leaps out at you isn't that she is all intimidating perfection. It's that she looks like great company, the sort of person it would be impossible to have a dull time with. And her work outside of the glamour of Hollywood as a UNICEF ambassador shows genuine kindness and concern for others. What made her so beautiful was not her looks, but what shone out of her.

Born in Brussels, Belgium on the 4th of May, 1929, Hepburn attended boarding school in England and spent part of WWII in the Netherlands, where she was rumoured to have helped the resistance. After the war, she studied dance and began her career as a chorus girl. Hepburn's screen debut was the 1951 film One Wild Oat, in which she had a bit part. It was her title role in Gigi on Broadway that led to stardom for the young Hepburn. Starring as Holly Golightly in Breakfast at Tiffany's confirmed her status as a style icon and gave us the stunning image of Hepburn in a dazzling tiara and gorgeous multi-strand pearl necklace with a fantastic diamond clasp at the front. In 1988, Hepburn went on her first mission for UNICEF. She travelled to Ethiopia, and went on to devote much of the rest of her life to humanitarian work. She became a Goodwill Ambassador and was awarded the Presidential Medal of Freedom from the United States. Her most beautiful work was not done wearing designer gowns.

Jacqueline Shaw is proud to name this delightful pearl pendant after a woman who showed the world so much beauty. 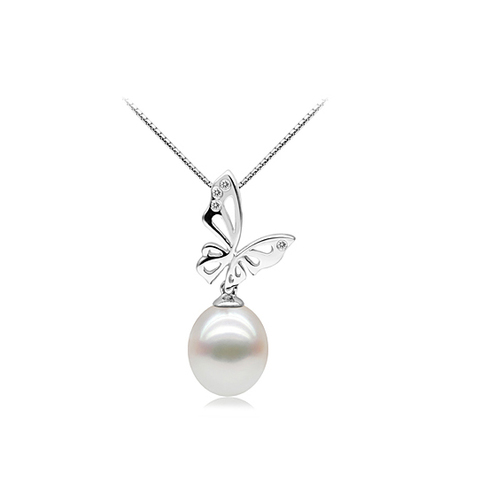